When Abigail Sattler was hired as the first archivist at Liberty University in 2005, the physical documents that documented the university’s history were hidden away in a room filled with unopened boxes and shelves full of papers.

“They took me to this room on the first floor of the old library in DeMoss Hall, opened the door and said, ‘Here’s all this. Can you organize it? Sattler recalls. “There was a giant pile of cardboard boxes in the middle of the room, some were over my head, and no one knew what was in those boxes. Sometimes I cautiously climbed the mountain of cardboard, opened a box and discovered what was inside for the first time.

Over the years that followed, Sattler and his team sifted through boxes, leafed through pages, and collected significant numbers of memorabilia in a variety of formats to create the Jerry Falwell Library Archives and Special Collections. The assortment is proof of the university’s mission and allows anyone to follow the story of founder Jerry Falwell Sr.’s vision as it came to fruition.

The archive collection proved invaluable as Liberty prepared to celebrate its 50th anniversary in the 2021-22 school year. Sattler was able to verify historical information for the anniversary website (Liberty.edu/50) and for a special display on the library’s digital media wall. She served as a source for those exploring the university’s history for anniversary-related projects.

A memorabilia exhibit from Liberty’s history located in the Archives. (Photo by Joel Coleman)

“What Falwell Sr. accomplished was pretty incredible in every way,” Sattler said. “Only a strong faith in God could have led him to boldly start a small Baptist college in 1971 with only 154 students, and that same faith led to a now realized vision of it developing into a world-class university that trains students to live manifest their faith and serve the Lord in various vocations. At the Archives, we want to do our part to embrace and honor this mission by making available to the public documents that trace the history of the university and the ministries This can help us maintain our fundamental roots as we grow and progress as an institution.

The library archives, open to the public, are located on the terrace level of the Jerry Falwell Library. In the Archives Reading Room, visitors can peruse yearbooks, editions of the school newspaper or magazine, and many fascinating documents, such as Falwell Sr.’s notes that he took in preparation for a interview with Ronald Reagan in 1980 just before the presidential election. . There are also records from the Conservative Caucus, the Moral Majority (led by Falwell), and the Thomas Road Baptist Church (where Falwell was senior pastor). Visitors will find treasures as diverse as Liberty sports memorabilia – game books, team stats, schedules, and more. – and other unique items, such as a rare porcelain set bearing the name and logo of Liberty Baptist College (pictured above), the university’s name from 1974 to 1985. Protection for these items is a priority, with many books being placed in custom acid-free boxes and stored in the library’s temperature- and humidity-controlled robotic retrieval system. 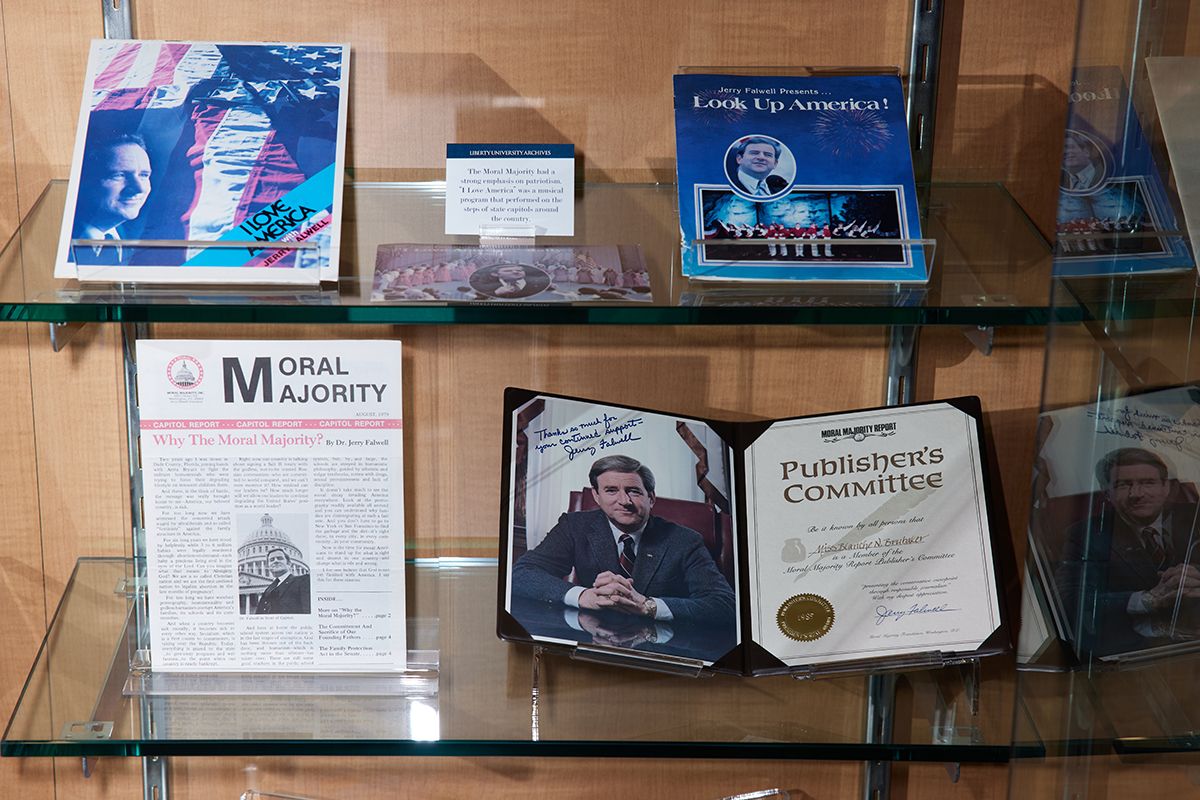 Programs and other collectables from the Moral Majority, led by Dr. Falwell. (Photo by Joel Coleman)

The archives also include several audio and video recordings. Visitors can play anything from an LP to CD or VHS to DVD and listen to sermons by Falwell Sr., recordings of college bands or other Christian artists, the video-recorded lessons of Distance Learning Courses (Liberty’s online program predecessor), and Suite.

Several historical resources are publicly available online at Liberty.edu/Library/Archives. Many items from the physical collection have been digitized and uploaded to the site; most are searchable in full text. Select media recordings have also been digitized, including all of Falwell Sr.’s “Old Time Gospel Hour” sermons as well as oral histories of the university told by alumni, staff, and administrators. The collection includes interviews with Liberty co-founder Dr. Elmer Towns, Flames Baseball and MLB alumnus and player Sid Bream, and legendary Bible scholar and teacher Harold Willmington, among many others. There is also a series of veterans who served in World War II, Korea, Vietnam, the Gulf War, Iraq and Afghanistan. 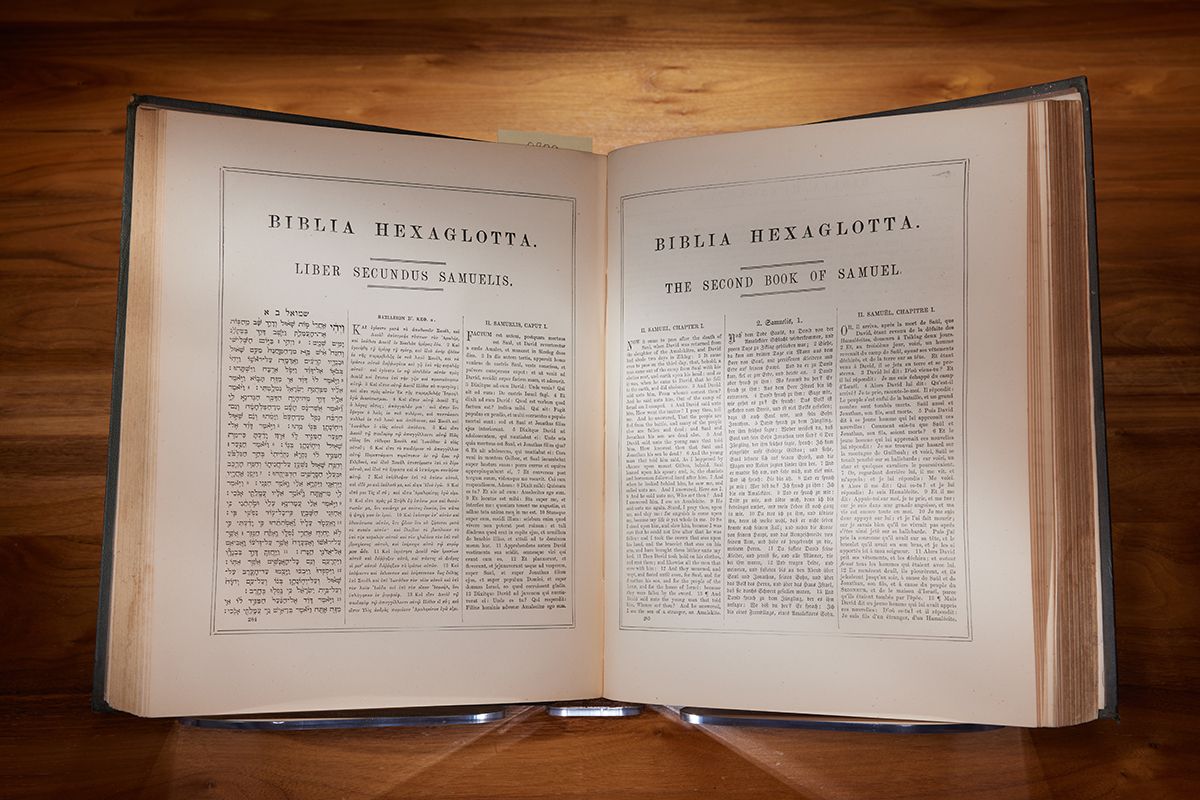 A volume of The Hexaglot Bible (Photo by Joel Coleman)

Beyond the university’s own materials, there is an ongoing effort in the Special Collections section of the Archives to collect hymns, Bibles, and Sunday School lessons from throughout history, some in different languages. . The collection includes a hymn from 1779, an apostolic history book from 1672 and a volume of the Hexaglot Bible with six languages ​​printed in parallel – English, Hebrew, German, French, Greek and Latin. A page from an original 1611 King James Bible is loaned to the Archives and displayed on a wall in the reading room.

The Archives has also amassed a collection of Christian fiction as well as pieces of secular literary history, such as a first edition of Agatha Christie’s novel “The Mystery of the Blue Train” and an original 1891 copy of The Strand Magazine with a history of Sherlock Holmes inside. . Letters and other documents from historical figures can also be found, such as an 1844 letter from Samuel Morse to “the Honorable First Auditor of the Treasury”. 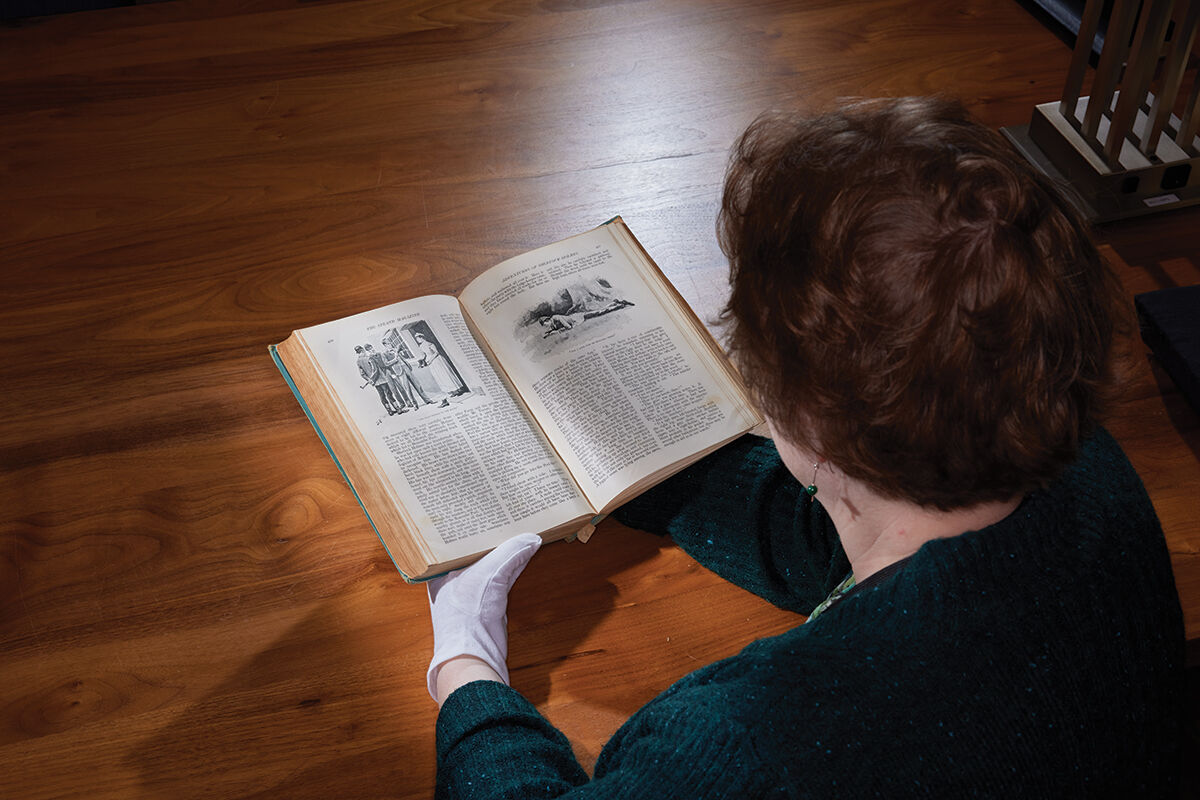 As an alumnus of Liberty herself, Sattler said she enjoyed collecting and sharing LU’s story. She holds a master’s degree in information science from the University of Tennessee at Knoxville and is certified as a Digital Archives Specialist by the Society of American Archivists.

“My idea of ​​a good time is to take a random box of papers and organize it, figure out where they came from and where they need to go,” she said. “My family worked at Liberty, I went to Liberty and I think the people here are the best, so it’s really not hard to get involved in the history of the university.”

Sattler understands the importance of his role in preserving LU’s history for future generations.

“These materials can serve as an inspiration to our students as they seek to boldly serve the Lord by setting grand goals, just as Falwell Sr. did.”